The other weekend I ran my 3-day free promotion of one of my travel books. As I’ve discussed previously I did a fair bit of work promoting my free giveaway which was 3 days running from the 8-10 August.  BTW this coincided with the London Olympics – which may have been significant…

I’m mainly talking about rankings in order to determine whether going free is worthwhile. Why not absolute sales ? Because I’m never ever going to sell 5,000 copies of  this book. It’s a niche subject. I’ll never hit the top 100 best-sellers either, instead my aim is quite simple, to be #1 in the relevant travel categories.

Prior To Going Free 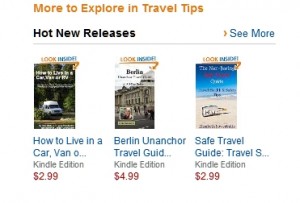 Prior to going free:

I’d managed to show up in the “hot new releases” in travel tips – this was the 4 August, just after I’d upped the price to $2.99 prior to going free, so the higher price would show during the free period (“you save 2.99” )

Screen shots are from my author central statistics. Note the statistics have been a little slow to update all of August, but I suspect that they are close enough for comparison purposes.

What Happened When The Book Was Free

During 3 days of going free I gave away: 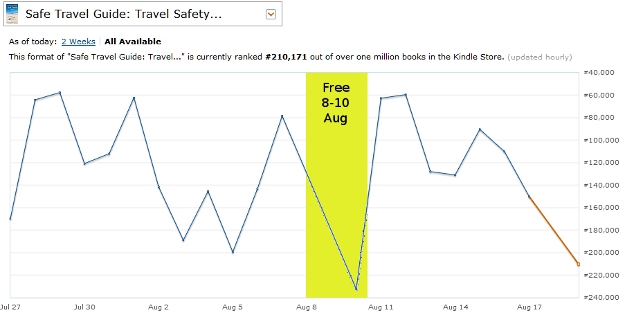 Those are the amazon.com statistics: I also gave away:

Lesson learned: I had a lot more interest in the UK than I’d anticipated, remember this was in the middle of the Olympics being held in London so therefore wall-to-wall media coverage, and far more TV viewing happening than normal.

What I really saw though was a marked increase in sales for my existing Vacation Packing book which still at it’s regular price of $2.99. This had been on sale for a year, and had had a new cover which improved sales for a while. The week before the promo it was selling about 1 book every couple of days. On the first day of the promo I sold 5 copies, (in the US , like I say I wasn’t watching the UK as closely) followed by 2 the second day.

Lesson learned: there is probably no point going free with only one book in the same genre. I suspect that the “halo” effect would have worked better if I’d had more books in the genre: I’m now aiming for five or six travel books in the next couple of months. 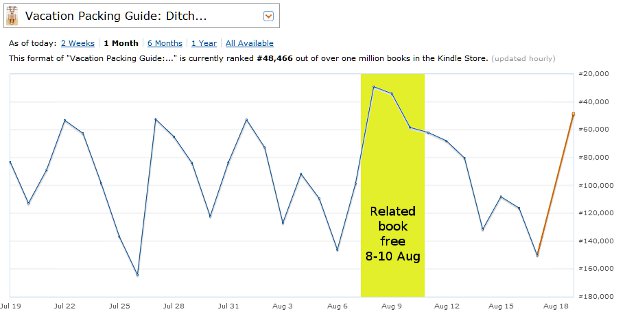 Sales of not free related book during free promo period

What Happened When The Book Comes Off Free

After being free for 3 days and allowing 24 hours for paid rankings to return:

So was it worth giving away the book for three days, free? If you just look at the book in isolation, no. Initially a book coming off free, plummets in the paid rankings, all the way to #238,164 in this case). After about 24 hours I suspect the algo adds in the free “sales” and I ended up at 71,340. As I was around #89,000 before the giveaway period this doesn’t amount to much.  Since then it’s pretty much averaged 1 to 2 sales a day, possibly slightly up from before the giveaway, though the rankings are very similar.

The book where I can see increased sales is the Vacation Packing one. Since then it’s sold between 1 and 3 copies every day for the week after the free promotion.

Lesson learned: Some people report amazing results from promos, some not so much. I rather suspect that it purely depends on how much your promo gets picked up and promoted in social media and blogs. The free Kindle books sites that I used are generic and mainly focussed towards fiction. I rather think I’d be better off promoting on travel blogs and will probably try that next time.

Is Going Free Worth It on Kindle Select?

There is an awful lot of angst in authorly circles about how going free is destroying Indies writers in general, devaluing authors, and will quite possibly see the end of literary works  as we know them, very soon. Seriously, I’m not making this up! On the contrary, going free probably has little to no effect on actual book sales, in fact I am fairly confident on the limited data I have is that it boosted sales, but of my other book, not the one on promo.Why? Because the other book(s) show up in the “Customers who bought this book also bought” line. Given the size of the thumbnails I’d suggest that you make sure all your books have a distinctive and consistent covers so at a glance the reader can see that they are related.

The only way to do a free promo like this is to have the book enrolled in Amazon’s Select program, has two benefits for authors:

The price you pay – is exclusivity.

That’s a fairly high price, particularly if your book is likely to appeal outside of the US of A.  Outside of the US, Kindles don’t rule, Kobo is a lot more popular and common in NZ for example, purely because it’s sold through the country’s leading chain of booksellers. In addition if your readers are outside of certain “core” Amazon countries e.g. Western Europe, Australia, NZ, Canada they pay an extra $2 per a book on the “usual” price from Amazon. This annoys me hugely because it’s utterly unfair, it doesn’t go to the author, that’s for sure. I could avoid this charge for my readers by directing them to an alternative download site like Smashwords or even just sell the book direct from my own site, but I can’t while it’s in Select.

It’s been an interesting exercise and I’d do it again, but I’m not rushing to enrol all my books in Select, particularly as, between the three books, I’ve had precisely one borrow. As Amazon Prime members can only borrow one book a month, I would imagine most will use that borrow for something a little more expensive and longer than my books.