Well the whole world is buzzing about the launch of the newest, greatest, bright shiny object of the Make Money Online world – Matt Garrett and Gary Prendergast’s Niche Reaper – this is pretty much the best thing since the invention of the Internet  – on account of it it will pay me a nice recurring affiliate income  and hey you guys might have fun playing with it – was that hardcore affiliate marketing enough for you? 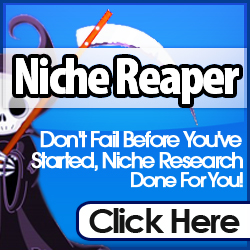 Anyone still here? OK. WTF Lissie why are you doing flogging yet another MMO product – well Splork has a way about him that makes me buy shit that gets past his bullshit radar.

So when I was procrastinating today Splork came up in my Google reader – and I am now $67 dollars frigging poorer – thanks mate.

So what does Niche Reaper claim to do – well their main claims are:

Been been there done that you might think – well I did anyways – as I am old and jaded. But what caught my attention was the second claim – build authority sites.

Now I’ve said before that niche sites work just fine for me, but I also know from experience of this site that once you rank for one term e.g. “site build it scam” then ranking for “hubpages scam” is a lot easier than ranking a new site for the same term.  So if you can start a site based around a bunch of keywords rather than just one – its easier – particularly if those keywords are closely related.

But stepping back one step further – Niche Reaper will actually suggest keywords to you – no not just by you putting in a keyword and it returning the variations –  they have a ticker tape screen / running board of new keywords on the front page – and within minutes I’d found some new keywords which not only have never thought of but actually had a hope in hell of ranking for with my existing sites.

The Niche Reaper’s method for calculating the ease of ranking of keywords and their potential value seems to be fairly similar to that of the Keyword Academy  not identical but nothing stupid like looking at the total number of competing sites  – but what made me put me hit the subscribe button was actually the feature that the computer itself would come up with suggestions for me.

The suggestions aren’t bad –  some are more commecial than others, a few were in Spanish, some related to the UK market – but it would be hard not to find something useful in an hour or two’s browsing.

What I haven’t Reviewed

I didn’t review the upsell videos/ebooks on the initial purchase.

None of the training videos under First site – after “Getting Articles”, Facebook, Twitter, Traffic, Monetization, Resources were available at the time of this review.

Who Do I Recommend Niche Reaper For

This May or May Not Be a Time Limited Opportunity

The claim is that Niche Reaper will be limited to 1000 subscribers (at one time I assume) and that they are about 1/2 way there as of the the time of writing. Now a time limited offer, act now or forever miss out – is an oldie but a goodie in online marketing.

It may however be true in this case because if it became incredibly popular then there would be a) a huge load on their servers and b) the keywords they are identifying as  easy to rank for would suddenly have a whole rabble of marketers going after them – thereby shooting their prediction in their metaphorical foot.

If it does close I bet there will be a waiting list though – thought the price might go up (because they have proven the demand).

Genuinely – I don’t know if you should hurry or not but:

if you want to.