OK guys – this has been an interesting experiment regarding keyword authority and SEO – which was what I was playing with with my review Teaching Sells Does It Work?

I noticed recently that this site had become an “authority” site – to be honest I’d heard Grizz and others talk of authority sites before but I didn’t really understand the implications.  First off to discover if a site is  an authority site just google the site’s name or their main keywords – google “make money for beginners” and you will find this dubious site in #1 position:

So I have one of these pretty little listings too for my name and when I rank for something related vaguely to passive income online – I get the old double indexing with the second listing indented: 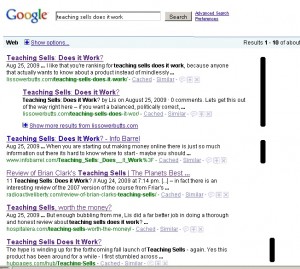 Once I post this update I suspect the 2nd indent will become this post – as it is sometimes its the tag page (that’s why you should NOT noindex your tag pages) but more often its a slight typo on the url which I noticed the instant I published and corrected – its not a 404 – the page redirects – to the correct url – I don’t understand it – but I don’t mind LOL.

The most clearest clue that you have authority though is quite easy – you go straight position #1 if you write a post on a relatively longtail long competition term  something like “teaching sells does it work” for example: I got the listing immediately and it stayed there, that’s with no link building on my part. Now would it have stayed there if Grizz – the ultimate “make money” authority blogger hadn’t linked to me? I don’t know – that’s the trouble with SEO experiments – you really can’t control all the variables as you would in the lab – and you certainly can’t control who links to you – but now I know I will almost certainly stay at #1 because of all those kind people who linked to me – thanks guys!

Now it gets more interesting – as you can see on that above screen shot, from yesterday BTW, I was also ranking third and sixth for an infobarrel and hubpage. What I was actually trying to experiment with was the often quoted concern that hubpages was losing its authority was true. Well AFAIK neither of the those articles have any backlinks (I didn’t link to them from this blog either) – so by themselves they ranked on the first page and stayed there. The infobarrel out ranked the hubpage consistently – but that was probably just because I had the long-tail exact match in the url of the infobarrel: teaching-sells-does-it-work while the hubpage I’d just called teaching-sells.

It got more interesting today though – I noticed that the hubpage had got up to third place – but the infobarrel was gone – in fact its deindexed (check by googling the exact url) – odd to say the least – as I say I certainly have done no link building on it. I suspect a glitch or possibly Google didn’t like the odd characters at the end of the url – which are probably computer speak  for “?” (you don’t have great control on infobarrel urls) – I do know in the past if I inadvertantly left a trailing “-” or “_” Google may refuse to index the page for a month or so.

So how do you make a blog an authority in your niche? Fairly simple really – google your keyword – and try to get links from any authority blogs that you  find on the first page.

Now while this  site definitly has authority is neither ranking well for my primary keyword (hint its not either Teaching Sells or Site Build It!) not does it have great PR – PR2 at the moment – it was PR3 until the Site Build It fiasco saw me got a ton of  relevant links.

I’m off to build me some more authority sites – in  a nice that might actually pay!