Matt Cutts has the best job in the world. He writes one little blog post and puts the whole of the Internet Marketing community into a tail spin – and his latest is a good one – in fact when googling “what is a content farm” the first result was a news result – indicating that the term is hot, hot, hot at the moment. 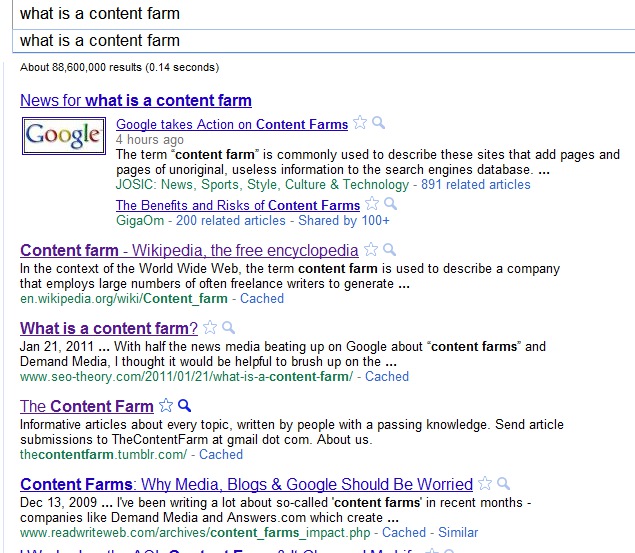 But WTF is Google doing? Are they trying to destroy all of us who want to make a few dollars of passive income a month? Is the era of making a living online gone forever? Google search is failing – and what Google is doing is a public relations exercise in order to recover some credibility – and the evidence is in the results of the above search.

So what is a content farm I thought? I asked Mr Google (using US results via the nifty Chrome Google Extension tool) – and Google told me –

News results: according to joisic.com:

The term “content farm” is commonly used to describe these sites that add pages and pages of unoriginal, useless information to the search engines database.

and gigaom.com thinks that:

Companies that do this have come to be known — somewhat disparagingly — as “content farms” because of the low rates they pay the people producing their content and because of the factory-style atmosphere of some ventures.

They then go on to quote examples of such companies as including:

Odd list – hubpages.com doesn’t pay me a cent – I get paid from a share of revenue from articles on their site- my biggest payout comes from Google’s Adsense… BTW I never heard of either of these sites I was thinking maybe LATimes or TechCrunch – its not like the discussion is not being had…

But getting on to the very, very best results for my query:

wikipedia: the entry is somewhat shorter than the list of references and says precisely – nothing …
seotheory.com asks What is a content farm and offers an opinion based on personal experience – rather than rehashed content – odd how its coming in at #4 behind the nonsense in front of it.

Next we have the site called – yup – “The Content Farm” – and yes you can find really useful stuff like how to talk to a child (hint first check if he is wearing priest’s clothing …) or how to determine the weight of an Oscar (TM) Statuette – hint – first win one … In fact its a lot more amusing than the usual stuff on ehow and good luck to them I say – and it just goes to show the Exact Match Domain (EMD) bonus still works ..

At position #5 we have a 2009 post from readwriteweb.com age and authority will allow you to rank with little effort at all…

Many people know how to rank in Google’s search results – and Google doesn’t like it. If you missed the broadcast mesage – to rank content in the search results it is easiest if:

Google is trying to rank quality – but frankly – it can’t.

Lets take a topical example. Christchurch New Zealand has suffered 2 damaging earthquakes in the last 6 months. In September 2010 there was a damaging earthquake which didn’t kill anyone, on the 22 February and aftershock of that quake may have killed as many as 240 people (figures still unconfirmed at the time of writing). So I am in NZ and I know that this story is so big that it has played in primetime on CNN, BBC and elsewhere around the world. There was non-stop media coverage (without ads) for the first 48 hours in New Zealand in TV1, TV3 and Radio NZ – my point is that there is an awful lot of information on the topic – a lot of new information – which can’t have been gamed by the clever SEO’s. So what does Google.co.nz come up with when I ask it the question many have asked me (an ex-Geologist) in the last week: 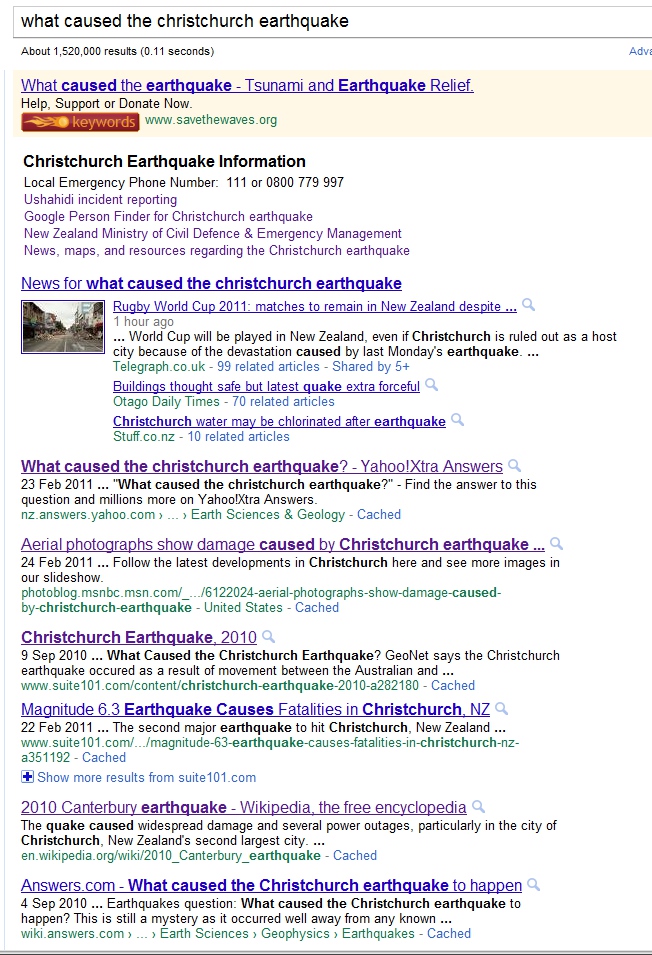 So in order we have:

But maybe that’s the best there is – so I dug a little deeper – here’s a good explanation and another one here and here – of course I only found those because I know that earthquakes are explained by the science of plate tectonics: obviously no one told Google.

Summary for those who skipped the preceding 993 words: