OK this is my last Keyword Academy Case Study post – its a review of where I got a new site to in the rankings by solely using Postrunner for back links and some thoughts about the quality of the Postrunner system.

As of  27 September – my postrunner promoted site had the following statistics:

A qualified success I think – but only qualified. Why only qualified? I have published 69 posts in Postrunner to support this site the most recent went live on the 23 August 2010. However of those 69 fully 22 are not indexed.  Now each and every one of those posts went to a different site in Postrunner – so I downloaded the list of backlinked articles and looked at each and everyone of them – this is what I found:

Now I was about to embark on a campaign of bookmarking to get these other links indexed – but  frankly some of them are going to be difficult – once the content is indexed on other pages on the site is going to be quite hard to “correct” Google.

Of  the 47  backlinked articles which are indexed – Yahoo is only counting 23 – so I looked harder at those 23. They were an interesting set:

What’s Not So Good About Postrunner

Do I still recommend Postrunner? Yes I do for $33/month its pretty low cost – but I am investigating another similar scheme which may be more effective – stay tuned. And if you are using Postrunner – do a periodic check of your articles and follow up the ones that have disappeared (by getting them returned via support) and those that aren’t indexed (by building more links to get them indexed).

I’d be interested in knowing  similar stats people have for Postrunner or similar program which involve the publication of unique content.

On the 19th of September 2007 I published my first hub – it was short, it was self-promotional – the url was wrong  for SEO. Over 3 years it has gained a total of 1143 page views – almost all of which are from search engines. It may have made me some money – I doubt it – but I don’t know, I didn’t track that hub 🙂 The hub was about midlife travel. That month my total online income was  $1.98

One of my most recent hubs was about the chances of a Wellington earthquake . It was indexed within a few hours – I expect it will have PR on the next update – I’ve built no links to it.  In August my online income from passive sources was $1600.

When I started on Hubpages – I had two  sites – I had made next to nothing (like less than $10 nothing) – I was newly a full-time “Internet Marketer” and I was going to making a good income my Xmas… This was long,  long before Keyword Academy, I don’t think I would have survived long enough to get to The Keyword Academy – if it hadn’t been for HubPages

What HubPages Has Done for Me

Top 6 Reasons Why I Recommend HubPages

So do you write for hubpages? If not why not …

Hi – its OK its really me Lis! I just moved the furniture around a bit!  BTW if you are reading this via the RSS feed you may want to click thru as I am talking about the look and feel of this page in this post – you kinda have to be here! Anyway as you might have gathered this post is promoting Impact Page Builder – why? Well because I have building up your trust so that you would buy lots from me and pay for the overseas holiday to somewhere warm!

Well to be honest from what I’ve seen no one makes any serious money promoting stuff that is one off purchases like Impact Page Builder – the market is just too small and  there is no agressive upsell or membership sites – which is where the money really is at!

Anyway getting back to Impact Page Builder. This is a brand new plugin from Eric Hamm – of Frugal Theme fame.  Well its been out a couple of weeks – it took Leo’s newsletter to wake me up to its potential. (If you are not subscribed – you’re an idiot – subscribe).

In their own words – IPB allows you to:

Our Template Builder gives you everything you need to create attractive designs quickly and easily. Our real-time interface lets you see your template take shape before your eyes as you make adjustments. Even the code changes you make to a Template’s Custom CSS are reflected instantly.

Each Impact Template has 15 empty Hooks, such as ‘Before Header’, ‘After Sidebar’, ‘In Footer’, etc. You can use these to hold anything from WordPress Widgets to custom Text, HTML & JavaScript.

With WordPress 3.0′s new Custom Menus feature, you can create and use Template-Specific NavBars. Run an unlimited number of interlinked mini-sites with unique navigation from a single domain!

Who is Impact Page Builder For

Who Should Give Impact Page Builder A Miss

Yeah well I never said I was a designer! But what I did was something like this:

So what do you think?  To me IPB is a game changer for the whole paid theme space.  For the same price of a single license of a premium theme (including Thesis and Frugal) you can buy a developers (unlimited) version  the Impact Page Builder plugin ($88) and have way more control than any theme can offer you. To just try it out you are looking at $44 for a single site license (and you can upgrade to the unlimited version by paying the difference later if you wish to). I just hope that Eric manages to get word out and get critical mass in the market  before the inevitable knock-off’s start coming out.

Drizzle with a chance of earthquakes in the afternoon…

On Saturday morning I was asleep – I usually am, but I was late getting up and getting online.  I noticed that Skype was flashing a message – it was SY from Hospitalera Blogs asking if I was OK. Hmm I thought yes – why? I turned the radio on – it was talking about the big quake – obviously not  the long awaited Wellington earthquake, and was in fact a huge quake of 7.1 in Christchurch.

Its been an interesting few days – and I don’t just mean the minor earthquakes that we  have had in Wellington (and yes quakes do come in swarms, and no I didn’t even notice them).  Two things came out of this: trends blogging and business continuity and communications in the Twitter world. 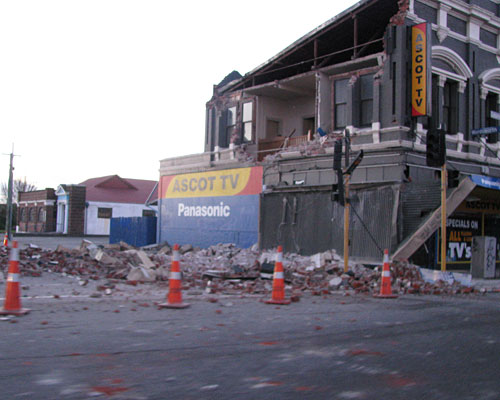 When something like a earthquake in Christchurch happens – people want information – and they want it fast.  Turning on the radio was a good start – they apparently started broadcasting about 7am – 2.5 hours after the initial shock.  But finding virtually no information in Google on Christchurch related seismic terms and seeming my semi-related hubs ranking well told me what to write about. Why did I put the articles on hubpages – not here? Authority – I knew I’d get fast indexing and fast promotion – and I have every new earthquake related hub I’ve put up is ranking for at least long tails within 4-5 hours (as fast as the hubpages analytics could tell me).  Now if there were just some relevant ads… 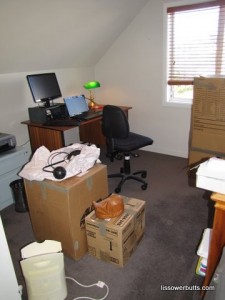 My office before the Earthquake – honest!

Frankly for the traffic stats it would have been better if I live in California – but in real terms I am more than happy to live in New Zealand. For those of you who consider earthquakes as terrifying acts of God – you are right – unless you happen to live in a country with good building standards. Both the dismal Haiti quake and Christchurch’s quake where about the same magnitude and depth and proximity to a city. No one died in Christchurch, maybe 230,000 died with a further 300,000 were injured in Haiti. Three were seriously injured in Christchurch. Now OK the population of Christchurch is 400,000, Haiti had a lot more – but this is all about building standards. And anymore who thinks New Zealand building standards are over the top have probably been silenced for at least a generation.

Oh and there some disasters which are just too easy to predict … Meanwhile – if  I’m not online and there has been a quake in Wellington, I live and work in modern wooden house which is on bedrock and at the top of the hill – I will be fine 🙂

One of the shocking stats coming out of Christchurch is that some small retailers will be bankrupt if their business is out of action for a week. Frankly I’m shocked I had no idea they lived so close to the line.  I’ve already proved that I can ignore my business for months. But what I will lose in an instant in a quake is power – which will stop my modem working instantly – even though the laptop would last for several hours (if it survived being thrown on the floor hmm).

In Christchurch the cell phones stayed up for several hours until the batteries operating the towers died. The traditional phone system lasted through out (though I suspect younger people discovered that there are phones that don’t need power). Maybe I need to remember how to connect via dial up (and a cable..) and/or a cell phone which knows about the Internet. Maybe I need a decent phone which could at least allow me to update Facebook and my blog.

I probably need some more cash too – I rarely have more than $50 in my wallet – and of course EFTPOS and ATMs need power and phone lines! I do actually have a cheque book – it would be interesting trying to persuade a retailer to take one though.

You see frankly if the big one does hit Wellington I’m not hanging around for the aftershocks and waiting for the essential services to be connected. If it hit during the day my partner will probably have to walk home from the CBD – it may take him 3 or 4 hours. Assuming that neither of us are injured  – we will be walking (the roads are a disaster waiting to happen and will be impassible to a cute little urban car) north until we can hitch and find civilization (aka Gin, broadband and power) – probably Levin or Palmerston North.  Our house is fully insured – I feel no need to hang around and protect if from – well exactly what?

Do me a favour – if in future you do hear about a big eathquake in Wellington (100% chance in the new 1000 years by the way) – and you haven’t heard from me online for 24 hours – please link to this post in the forums that are asking where is Lis, and put it on my facebook wall again.

Meanwhile what are your business continuity plans in the case of a natural disaster? Must admit its the first time I’ve really thought about it…