OK I’m going to be posting a regular update on the progress of my travel authority site. The updates will probably be about monthly – unless something huge comes along. Frankly monitoring this sort of project more than monthly means I’d probably be doing too much talking and not enough doing – if you know what I mean.

Hey at the end of it when I’m making thousands a month from my travel site – maybe I’ll pull all these together and flog the ebook to you guys!

Until them – I’ll try to explain what I’m doing, and more importantly – why. I know making the transition from niche, anonymous site, to being out there with a site with your name on it is daunting for many. Well its daunting for me to, but frankly if I can do it, anyone can. Can I do it? No flipping idea, but I’m going to try, stick around for the ride!

Background on my Authority Site

I’ve written about my overall business plan for this site before.

I initially registered the domain on 1 June 2011. I registered it to be the “home” for my self-published books. As I’ve said before I’d found getting organic rankings for a travel site is tough going. I didn’t do much with the site – tossed a little content on and let it sit. If found some very long tail keywords, and wrote about 7 posts. I then published nothing for two months, then I did a few more posts in September, then again nothing until March.

Meanwhile I did a few guest posts and other hmm… “self promotional advertising” – and voila my search traffic started building steadily from 146 visits in January to 946 in March (so far my record month for search). This dropped a bit in April – why? Not actually sure, the Penguin debacle was late enough in the month to not have a huge effect in the statistics. More likely its the seasonality of the search terms (hard to know without a year or two of good data).

BTW If I was doing this again I’m not sure I’d use my name in the site’s url again (for frigs sake this is the second time I’ve done this – you’d think I’d learn!). In the unlikely event that I want to sell it, the branding issue would be a problem.

Frankly I don’t know enough about the social to know what is good or bad about it! I noticed the page rank had dropped a couple of days ago with the latest PR update but apart from that every other metric seems to be going in the right direction.

What am I aiming at with these metrics? I’m aiming to get into one of the many “top 100 travel blogs” lists. Nomadic Samuel’s seems to have an objective list of requirements –  and I don’t think I’m a million miles off of making his cut off.  I also think there is a very much a snow ball effect with social media. If you have no friends or followers no one wants to go first (in fact if the site had been really brand new and I hadn’t got around to creating and ignoring the Facebook pages months ago-  just buy some likes fiverr.com will have plenty of people offering that service)

Really? I’m surprised – I managed to average a post a day – and quite pleased! Did I publish crap? No I don’t think so, as this is a subject I know very well, so far everything I’ve written is based on personal experience.  As I’ve said before I’m publishing three main types of content:
I’m not yet getting a whole lot of feedback – but my doing little else than promoting my content on Facebook, I started to get some significant traffic from there.  Well significantly more anyways!
This is the tough bit – and why so many bloggers fail. If you are writing and hoping to get any engagement, you really need to wait for at least a year. My most heavily trafficked posts don’t have ANY comments – searchers don’t seem to comment in this niche. My fellow travel bloggers are the ones interacting, that’s not my final audience, but its a start.
Now one of the things I’ve never had on any site is an “Editiorial Calendar” ie a regular publishing schedule. But for social traffic – I can see the advantage. So I did a couple of things: 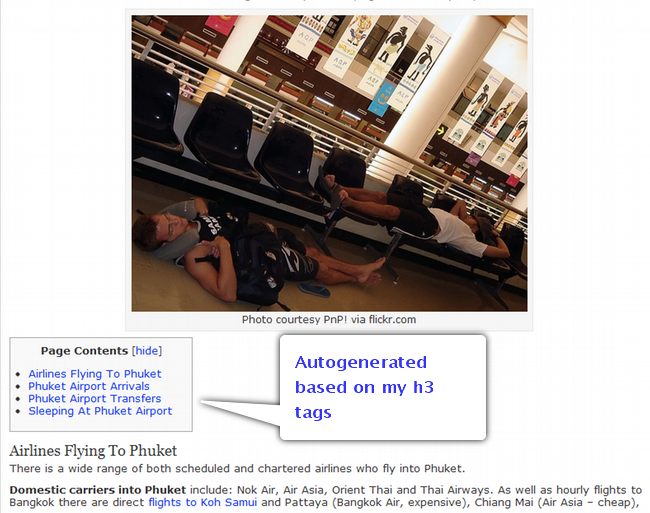 How To Build Social Media Engagement

Well if anyone has the passive income solution to this one I’m all ears!  I think this is one of the biggest hurdles for many Internet Marketers. I’m applying a really simple strategy. I basically go looking for bloggers in my niche. I comment on their sites, and I comment on their site’s facebook page. If they respond I do it again.  I don’t pick the “leaders” in the niche. I go to their sites sure, but its not them I’m targetting, they don’t need me. Instead I am picking on their followers, who also have travel blogs. The wannabes if you like. The people at my own level are far more likely to respond and reciprocate than the “big boys”.

I’m nice, and most people are nice back. Its strategy that worked bloody well for Griz and Court in this niche – I see no reason why it shouldn’t work in travel – because people are people.

I’m also in several “membership groups” around travel.  Why? For the networking. Yeah really that nasty N-word. Why the heck does networking matter – well for the links I just described above!  My being members of those groups I’ve so far found an advertiser who spent over $400 with me (for 10 minutes work), plus I’m part of a nice guest posting set-up which should give me lots of exposure at the end of this month.

Why Am I Building Social Media Engagement

Yeah I would have asked that a month back too! Why? For the money of course.  As you no doubt already know social traffic won’t make you rich clicking Adsense ads. However social engagement is something that advertisers are looking for when they are considering working with a travel site. Not all, true. Some, maybe many, just want to see their keywords on your page and Page Rank.

But the more discerning actually want figures that prove you have an audience. Because that’s the audience they want to reach.

Actually neither is rocket science, you just need to figure out an approach, and do it!

I just found your site this week. I am so glad I did. It’s just nice to read something REAL for once! I’ve been doing the website/income thing since 1999 – it’s tough. And just got a lot tougher since January 2011.

One of my main sites was hit by Panda in April 2011. I have yet to recover and sometimes I just want to say WTF Goo gle!?!! LOL

It’s hard when you see utter crap ranking above you after a “quality” update.

Anyway…
You’re a breath of fresh air. Keep up the good work! It IS appreciated 🙂

I’m more at the stage of FU Google , really! I’m looking hard at the whole social media stuff at the moment, time to let Google settle down and sort out the mess that is currently the search results.

Oh yeah I think its going to be a hard sell to get some of my readers to do the “real website” thing – but I’ll try! And hey if succeed you’ll all get a discount on the ebook

Didn’t know about this “top 100 travel blogs” , I need to work on my alexa rank. I think alexa toolbar is more SEO think, but not much travelers have installed it.

I have started a new blog http://thegoldenkeywords.weebly.com where I am giving long-tail commercial keywords which are easy to target. I tried some of these on my own and got immediate search traffic. I think this will be useful for beginners. What do you say???.

Personally I’ve hadn’t had much luck with weebly -sounds like you’re doing better. Remember you don’t own the site though – you are dependent on weebly continuing to allow your blog to exist!

This is some great information Lis.

It is really nice to see your figures, and honestly I am thinking we are doing some very different things, as I am struggling to break the 1000 unique visitor mark after two years online, with over 200 content and image rich posts. Admittedly I have not had a heavy focus on SEO, however Google Webmaster tools still lists me as some 1000 plus indexed pages (guessing this includes comment and tag pages).

Just wonder what source of information you use for the visitor counts, if I drop back to Google Analytics I am only showing about 200 unique visitors a month where Awstats shows around 800-900 the last few months.

I’m using Analytics – AWStats counts too many bots for my taste. Getting indexed is no longer a problem (it was years ago) – the problem is getting rankings, because if you just rely on social its very hard to get significant numbers. The other issue of course is once you have the visitors – will they actually make you any money i.e. are they buyers. That’s one of several reasons that I’m focussed on eBooks at the moment

Wow, my blog is really not doing anywhere near so good, with Google Analytics it is getting up around 10 a day if I am lucky. Need to change something, I am thinking more promotion somehow, because the content and Search traffic is not doing it.

Joel, try statcounter or getclicky. These counters will show different numbers but it is always better to have more options to analyze your traffic sources.