Due to the fun of time zones mostly when its the 24th April in the US its the 25th April in New Zealand. In New Zealand and Australia the 25th April is ANZAC day. ANZAC Day is the day Australasians respect our war dead – so I personally think its pretty fucking ironic that’s also the day that Google decided to DISrespect the right of small business to exist on the Internet.  By the 26th there were an awful lot casualties including askthebuilder.com – apparently being the poster child for the Adsense team and providing huge amounts of unique and original content is no guarantee that Google might rank you in the search engines. So much for the content is King argument. The winners, fairly universally, appear to be large corporations as domain authority and, quite possibly, large Adwords budgets, trump everything else.

Full disclosure: my niche sites got slaughtered. As in every ranking gone from the top 100. My larger sites are generally OK with some oddities like losing the ranking for “passive income” for this one.  However I do not think this is a result of the deindexing of Build My Rank, I saw the drop of a few pages that was the result of that. This was the wholesale disappearance of every ranking for each site.

Most of those affected where niche sites, which, frankly repeat the same keyword variations a little too much both on-page and in the backlinks –  I’ll ignore them for a while before I decide what to do with them.

But there is one I’m, frankly, annoyed about, the book site I set up last August.  I set  this site up to promote my Vacation Packing List book. Before 24 April it was bouncing around page 2 for some related long-tails – but now its gone, entirely, it doesn’t even rank for the site’s domain. Instead we have: 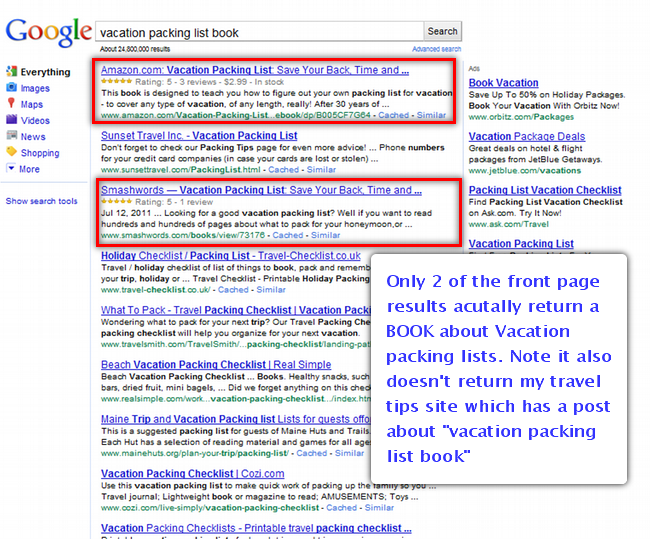 I mean that terms is hardly a very competitive one – in fact, as witnessed by the SERPS – Google has hardly anything that matches! It has good links and about 20 links from Build My Rank – if that’s what sunk it – then the very scary world of negative SEO is alive and well.

My gut feel is that this one is a huge win for Google – but not for its stated reason of “removing spam for the search results” – it clearly hasn’t – just Google some of your favourite queries using a proxy such as pagewash.com – to see the rubbish that is ranking.

No this is a winner for Google – because of the number of small time SEOs I see claiming that they be quitting the game. In fact if I was looking for an investment then I’d be buying shares in any company which provides email services such as mailchimp or AWeber.

Because although I’m not quitting the game – I am focussing more on social traffic and building email lists. And those are easier to do with larger sites. Are niche sites dead? I don’t think so – unless every specialist site – like my one above, and every small business’s website, are doomed to rank nowhere. Which may be what Google wants – but how long before the general public start switching to a better search engine? Because at the moment if you search Google isn’t providing the answers – they are giving you a list of big brands, and sites which are way out of date.

Other views on the update: