Let’s face it – I am scared of the camera – well one that takes moving pictures anyways! I don’t really have an issue with photos of me per se, particularly if they are stored on my computer so  I can delete at will. But video has always made me nervous.

I’ve tried it a couple of times – and I dislike the sound of my own voice. A lot.  Talking the camera is also perilously close to talking to an audience which is alive. And that gives me stage fright. 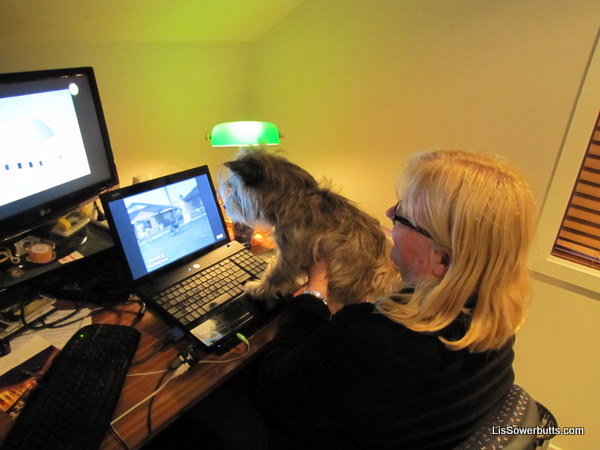 But the case for audio and video is becoming a bit overwhelming. For example. No prizes for figuring out that both this blog and Pat’s over at SmartPassiveIncome.com go after the same main keyword. There’s not much in it – at the moment he’s #2 and I’m #4 in the SERPs. But I’ve never been able to figure out one little thing – why the hell does he have so much more traffic than I do? According to SEMRush he doesn’t rank for another huge keyword in this niche – so WTF was going on?

At the same time I have Mark from SEOCobra bending my ear, that he doesn’t get why more people aren’t adding Youtube videos to their posts in the system. Mark has a tendency to call late at night, after I’ve had a gin or two, or early in the morning when I haven’t had enough tea (its a time zone thing) – but finally, today,  once the coffee kicked in, I went oh duh!

Its because most of us are idiots and don’t haven’t made  youtube videos promoting our sites, or demonstrating the products we are flogging.

How stupid is that?

And its across everything – non-fiction indie  writers do book trailers.

Wizzley allows you to add videos so you can demonstrate what you are talking about.

If you do it right – you can submit the audio to iTunes – in fact get yourself an iTunes channel – and the video goes on Youtube.

Do You Do Podcasts / Video – What Tools Do You Use?

I’ve used video once to sell something. I used Picasa to string a bunch of photos together to help sell our previous house. It was a lot quicker than learning how to edit video, and I was running out of time after days spent cleaning! It worked pretty well:

I’ve played a little with Jing – which I quite like. I’m perfectly willing to procrastinate over the technology for a while – so what are you guys using – and please,  I’m not buying a Mac – it has to work on Windows!

Have You Signed Up Yet?

Did you sign up for the newsletter yet? If you don’t you’ll miss out on all the inside Z-Blogger tips! And how much money I did or did not make this month.

If you keen to check out SEO Cobra when it re-opens – remember lists are awfully good place to make announcements!