Not sure what a backlink is and why you need them? Check my earlier post on why backlinks are important. Check here for an update on using twitter for backlinks.

I haven’t been convinced yet of the value of Twitter for building my passive income online business. I have however just found a twitter ap which may be about to change all that.

I only started using Twitter to follow Vic @ Bloggerunleashed random live chats – he twits before a chat.  A couple of months ago I started following people I knew from other forums or whose blogs I liked. I still wasn’t that impressed.

Then I started doing some trends blogging with my Australia News blog.  Then I found a use for twitter – I knew about the airplane that ditched in the Hudson about 3 minutes after it happened – it was a tweet. I saw a tweet about a $100k job to work on a Queensland Island job The first post I wrote on the subject got 200 visitors in one day.  The job applications don’t close until the end of February so I am expecting long-tail traffic on this one for some time.

So twitter stayed -as an information source – but I still didn’t like it for promotion – I just don’t get that much traffic from tweets and I and the links to them on my Twitter Profile were NOT do-follow, and I am the only one who actually like to read the url before I click it rather than just like a junky shortened url?

TwitWall is the answer to my problem with twitter – the limit of 140 characters. I find it way too limiting – and yes I hate SMS on cellphones to, call me luddite if you want 🙂

So I get to talk more on TwitWall

I get to include anchored links which are DO-FOLLOW.

I get to add photos which can be useful for a bit of traffic too.

The downside – people – who click my tweet will go to the twitwall and will need to click again to actually come to my blog – so they may not come!

At the moment I am using a combination of twitwall and normal tweets.

OK I have been doing some Web2.0 stuff over the last few weeks and have looking for  sources of backlinks which will a) work for the search engines i.e. give me a do-follow backlink and b) might even get you some focused traffic. Getting my sites to the point their earn me passive income is all about increasing my backlinks

I don’t know if you count Entrecard as 2.0 as really its just a fancy banner exchange which as been around forever (ie like 10 years – a LONG time on the Internet).

I never took much notice of Entrecard but people over at the Today forums were singing its praises so I signed up (free) and installed it on my Travel Over 30s blog.   And I dropped my entrecards – almost always on relevant blogs in the travel and expat sector. You can drop a maximum of 300 cards a day – with a little distraction – ie. actually reading some of the blogs this can take several hours – most of the blogs have every widge under the sun and take FOREVER to load.

And sure enough the traffic came – maybe 50% of people I dropped on dropped back within the next day or so – to be honest this was better than I had thought. I got a bit of traffic from them.

Then I stopped  dropping – and my after a day or so my Entrecard traffic went down to a handful a day. Which again was to be expected. This was not passive income – if I didn’t drop no one was going to drop back or even visit.

So Entrecard wasn’t building me an ongoing audience – it was just getting me a reciprocal “drop and run” response. So if I didn’t drop I didn’t get traffic.

Which in its self is not so bad – but it got worse, a lot worse. My Google search engine traffic disappeared. I was getting a steady flow of queries from Google to a number of different posts – I had had this traffic for around a month.

After a week or so of serious Entrecard activity -my search engine traffic had gone. Why?

Well I don’t know for sure- as you never do with search engines, but I am almost certain it is because my Entrecard traffic was low quality – it was hit and run – they came found the Entrecard widget – dropped and left.

Google rates pages for a number of reasons – but a lot of very short term visitors who click in and out – seems to get you marked down. And I think this is what has happened to my blog.

Meanwhile my other Today blog, which I never had Entrecard on has gone from strength to strength on search traffic.

So not only will your Entrecard traffic not convert to sales, Adsense clicks or even readers – it will also have a negative effect on your search engine rankings.

Entrecard is off my blog as soon as my current backlog of adveritsers are through.

Does an increase in traffic bring you more Adsense income? Not in my experience: one of my most consistently visited articles on HubPages has brought me about 10c – in 3 months! 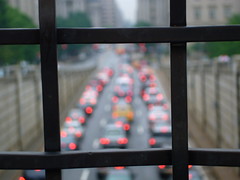 received hundreds of visits from Stumblers – it was really really exciting: did it make me any money: no. StumbleUpon traffic doesn’t convert – people don’t even seem to read the site they just click onto the the next one. They usually stay for less than 10 seconds.

So what is the best traffic: organic traffic the people who find your hub or website from searching in Google or Yahoo or MSN not because they are a friend from social networking or your real-world life. Why are they the best traffic: because they have a problem and if they find you hopefully you can provide a solution.

That’s the trick though: there are basically two to solve your visitor’s problem:

Which one gets you paid?