I think I have finally figured it out, I have finally understood not just myself, but all those other sad, lost, souls who find this blog by asking questions of Google like is Brett Mcfall a scammer, or is Empower Network a scam or is self publishing a scam. (With apologies to Meatloaf, two out of three ain’t bad).

I know what they are missing, and I understand why I have always reacted so badly to the scamming mobsters, and no you cynics, it’s not just because it brings me never-ending traffic from the Google Gods.

The answer? To why so many vulnerable people are looking for the answer to making a dollar online? The reason some of us try and fail for many years, while others are insanely successful at it? .… 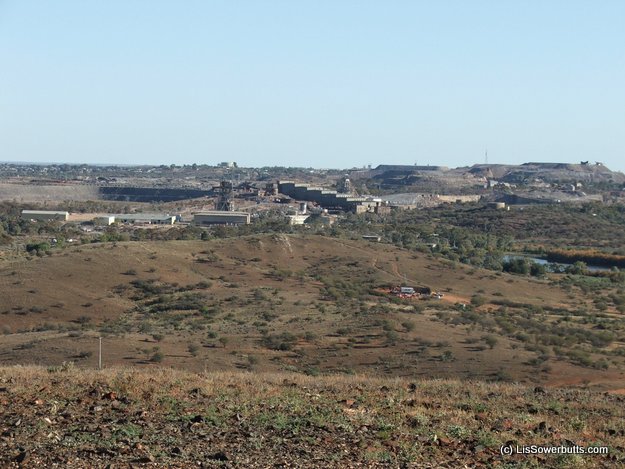 Broken Hill, NSW, Australia, photo taken about 25 years later but nothing much had changed

Well first I need to tell you a story. Stay with me here. I know I should keep things short and bullet points, and relevant. But I feel like writing something different today.

I long time ago, in a different country, before the Internet was invented. I was a geologist working underground. I was a new graduate so I knew lots and lots of interesting theoretic stuff about geology; like how old the earth was (hint a little older than 4004BC), and why the dinosaurs went extinct, and even why Australia has lots of mines and New Zealand does not. I knew very, very little about calculating ore reserves. I was set to work to doing a lot of calculations which involved digitizers, maps and figures, on paper (Excel wasn’t invented either). I was supposed to be supervised by a senior geo – but he got busy. Months went by, in the end I helpfully finished the report,without him looking at the figures, and forgot about it. I took a transfer to a mine in  PNG. Around 9 months later the first mine was in the depths of a long and bitter industrial dispute. One day I got called into a senior manager’s office in PNG and said he had call for my previous boss in Australia. I took the call, and on a scratchy phone line, powered by an undersea cable, I was told there were serious flaws in my report.

I was asked to put my side of the story, I was asked to justify a highly technical document, which I had not seen or thought about for 9 months. Without a copy. Without warning. I mumbled something. I was fired. I burst into tears. I think my current manager finished the call for me. I was totally mortified, I was clearly a rubbish geologist, and worse, I’d cried. (I was the only women either of these guys had ever employed I tried very hard to make them forget my gender). I was beside myself that I had apparently made a serious professional mistake. I forgot that the guy firing me was also the guy who should have supervised my work at the time. I didn’t notice my current manager saying that he had no problem at all with the work I’d been doing for him for 8 months. That didn’t matter in my mind, I was utter and complete failure, as a human being, and more importantly in my profession.

Looking back I was the fall-guy for a department that needed to cut costs fast, I was out of sight, on secondment elsewhere, I was new, I was a girl, I was the only non-Aussie, I was an easy target. I was a victim of unjustified dismissal, not that I realised that for many years.

My bubble was burst. Up until then I’d been a good student, got a solid upper honours degree, succeeded at anything I put my hand to pretty much. But it was a front. I felt a complete and utter failure, my mother never knew I was fired from that job. I never dealt with the issue on my CV. Instead I spent a year retraining by getting another degree. I was good at that too. But every time there was conflict or issues in the workplace, I ran, not walked away. If I failed at anything I learned to hide the bodies and move on. I was thought that someday they would figure out that I was just making stuff up as I went along.

So The Secret Selling Your Books Or Making Money Online

Yeah I’m still telling my story. I know you are scanning for the bottom line, but stay with me. Basically, quite well hidden in my persona was the feeling that I was a fraud, that I would be found out, publicly humiliated and sent home. Imagine her, thinking she could do, well anything, really.

Imagine her, thinking that she could learn to be an entrepreneur and make money online, run her own business, or even, and this is pretty funny for someone who never took a writing class until this year, could write books.

So I decided to get one of my books translated. Into German, a language in which my comprehension extends to: ja, nein, Heil Hilter, schnell,  I see nuttin’ (Hogan’s Heroes has a lot to answer for), and apfelstrudel. I hired a translator. I fought a bit with the translator when a trusted friend disagreed with the translation. I got a translation. I put the book for free a few days. I promoted it on a Facebook page where I knew there were some commentators that were native speakers.

The first two comments were, and I paraphrase; the book sucks. Or at least the translation does.

And you know what my very first thought was? Shit, it’s not good enough, I should unpublish it immediately. I should apologise for having had the audacity to think that I could publish and promote a book in a language I don’t speak. Immediately I knew I wasn’t good enough.

That is precisely what I would have done a few years ago. But over the last few years I’ve noticed the people who have done alright with their online business and I notice the ones who have disappeared from the online world and back to the world of work. The ones that succeed, what do you think they have in common? Are they super-smart?, are they amazing writers?, incredible marketers, really, really talented in some other realm?

Some of them, but not all. They do however have a stubborn self-belief. They THINK that they can succeed. They don’t expect to fail, although they figure they probably will. They would prefer to succeed, but if they don’t they analyse the issues and adapt and move on. They don’t quite because they think they suck.

They know there is not one way to make money online. They know that if there was no one would be sharing it with you for $97.95 or even $1997.75 with an easy payment plan.

And then I got a private message from Tom – he pointed out that the book was fine it was the blurb and the disclaimer that sucked. The disclaimer was not needed for the core of the book, I deleted it. The blurb, of course, is critical. So I wrote back to him, could he help – I’d be happy to pay. He didn’t reply for about 20 minutes – and then replied with a new translation of the blurb and refused to take cash. I updated the book overnight. Within two days of going free, I had a book ranked #2 in the free listings of amazon.de Wasn’t it lucky I didn’t go with my first instinct, to pull the book from sale, pretend I’d never done, and/or to declare to the world, that getting books translated doesn’t work.

Except it wasn’t anything to do with luck – it was mindset. I managed to see through the unwarranted criticism, found  the real issue, and fixed it.

Running An Online Business, Or Writing Books – You Need One Thing Only

The thing is, the trick to making money online, no matter how you do it – has nothing whatsoever to do knowing how to format a book for Kindle, setup a WordPress blog, or whether you are active on LinkedIn or Twitter. Nothing. At. All. All of those are skills you can learn or hire as your budget and aptitude dictates.

Far, far more fundamentally, you need to know how to silence that inner critic that keeps on telling you you don’t know what you are doing and you have absolutely no right at all to be doing whatever it is you want to do. You see if you don’t believe in you, no one else will either.

Let’s face it; in a world where Dan Brown is a best selling-writer, you don’t need to be an amazing writer to succeed as an author.

So You Jumped Here To Find How The Hell To Succeed Online or To Successfully Self-Publish?

When I format books I get all sorts: I’ve covered erotica, Bible stories and children’s books. None of which offend me, some amuse me more than others. But once, and only once I’ve hesitated to say yes to a request for formatting. When Patrick asked me format a book titled “Making Your 1st Dollar Online

So I stopped and I skimmed  the book. Then I slowed down and read it. Then I asked the author to let me know when it was on sale – it may be still free or it may be paid – doesn’t matter – buy it, and read it – particularly if you are just starting out. It covers the basic models of making money online; for the writerly types info-products are books, and no he’s not talking specifically about self-publishing – but the mindset is probably even more important if you are still looking for someone to tell you that your book is good enough. (NB I haven’t reviewed the affiliate program he is promoting in the book and can therefore not recommend it).

It must be my week of inspiration reading because the second book I’m recommending today I had already downloaded, but not got around to reading. After Tom did me such a huge favour at short notice I thought I should read his book. His Secrets to Success in Writing and Self-Publishing

is for authors who want to self-publish, but also again it’s far more importantly about your mindset, and has some actionable steps next time that voice inside your heads should out – just WHO do you think you are?

Again he’s not focused on Amazon algorithms or whether you should stay in Amazon Select or not – it’s the basic – how to do I deal with the stupid shit inside my head – highly recommended. And no it’s not just fluffy-feel good stuff, it actually has some actionable stuff I may even action!