I’m an adult, I’m not scared of the dark, I don’t believe in ghosts or monsters. But I was scared – really, really scared – of this: 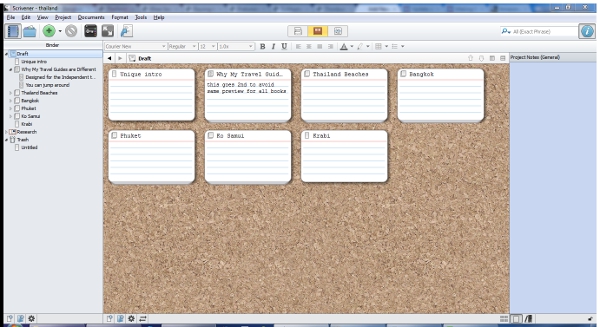 Not the program, Scrivener, – its cool, it was the outline – the outline for my next book. That File.

It was just so scary – I had to hide from it for a month. Eventually I decided it was too hard, I went around it – wrote a bunch of content for Lis’s Travel Tips – content which is quite similar to what will be in the book – but they were just long blog posts – I can write those!

As Tracey pointed out in the comments of my last post – you actually don’t need spectacular sales to make money selling indie non-fiction. Although she missed the future value of money ($3k today is worth more than $3k paid out over 10 years) – her point is valid:

Basically what I’m saying is that it’s about volume (amount of books you have) and repeat customers.

I knew that, I knew I had to write more books, for goodness sake I’d written one,  why was the next one so bloody hard?  I dunno maybe its just me – having done something out of confort zone one, doesn’t make it that much easier to repeat the exercise. Weird

However as a student of time management and procastination I knew that I couldn’t manage the problem if I didn’t measure it. The problem was two -fold:

I decided to start with the easier problem – the first one. I started writing – last week I wrote a total of over 8000 words  (I don’t count comments, forums, social media, only words written as articles either on my sites or to promote my sites). It was a little scary – I was guest posting – something I’ve never actually done. But amazingly I persuaded some bloggers to publish my stories: Wellington Sculpture and Paris in the Snow . But it wasn’t as scary as That File.

OK so my output was up, and it was good for marketing – but I really needed more  product to sell. I needed to deal with That File.

Now Dave in his clever little Pond decided to start with some motivational board. Post your goal – make it public, and either win or fail – if you fail – well it was bad – the Duck Booed

Would I have stayed up if I hadn’t promised publicly that I’d write them – nope. Where they great words, nope, the grammar is awful and the typing was falling off markedly towards the end. Doesn’t matter – they can get edited, they are not final words, but they are a start, and having some words rather than a blank screen, is about 80% of the way to the goal.

So today is Friday – and I have another 5000 words to write on my book! Later!