I have the habit of near the start of the month using the Rank Checker in Market Samurai to check where my sites are ranking. I did it a couple of days ago and was sad to see one that had been turning a few consistent pennies had dropped out of the top 100 positions. Odd I thought because it was an exact domain match which had happily sat on the first page for  three or four months.Now I didn’t notice this for every site put it down the Google dance and got on with life.

But it was new – I’d never seen an EMD drop so hard after so many months.   With the disturbing stories coming out recently of good people getting  de-indexed . I was concerned – not so much for the $10 the site earned me a month – but the fact that this could be the start of a trend.  I hoped I wasn’t next in G’s sights – but I couldn’t really believe that I had that much influence on the WWW but I  had started cleaning up in order to do the right thing , even if Adsense had asked for it – and I knew that not every bad arsed marketer had been hit.

Now I’ve seen the explanation – you may have noticed that Google has changed their interface to the new one: 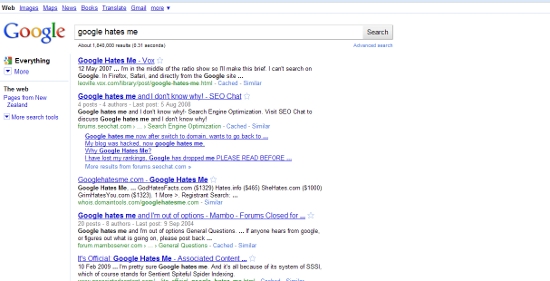 Whether or not this is making any difference to people’s rankings in the SERPS – I haven’t heard so yet – but  what it has done is broken all the scrapers. How does this affect you? Well if you use a tool like Market Samurai or MicroNicheFinder or almost anything else  (except Google) to check your results  – its broken and the results are misleading. Market Samurai has announced an update on Twitter – but its not out yet.  I  suspect because the roll out of the new Google interface is gradual across  all its data centres that’s why sometimes the results are OK and some aren’t. If in doubt check scroogle.org for non-personalized results – scroogle does seem to be working BTW.

So if you do see something odd in a tool double check – check your stats –  if the traffic is about the same – nothing much has actually happened. But far more importantly in the immortal words of Jonesy – put your tin hat on  and DON”T PANIC!