Sorry I don’t usually do purely personal posts of Passive Income Online – so you may want to skip this one – unless you were wandering what happened.  Well first off from the online point of view – nothing bad has happened – in fact its looking like a record breaking month on my passive income goals – and I mean truly passive income because I have really done very little focused work this month.  We’ve had a month of it. 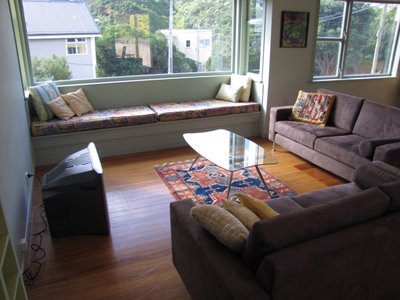 First we finally sold our house in Khandallah (BTW ranking #2, #3 behind the major Real Estate Institute in the country – just wondering how much an Agent will want to pay for the site …). Got pretty much our price in a very slow flat market which was freaking out about the budget (now been and gone). We move out in a few weeks. Where to – who knows I’m  no fan of bridging finance – we may have to rent for a wile or we may win the tender that closes today – something will happen.

I don’t know how it is in your country – but in New Zealand the Internet has been a game-changer for selling your own home. The standard deal is you pay around 4% plus tax to an agent to “market” your property. They will probably charge you for advertising on top of that – but even at that rate you are looking at NZ$20k for our  place (US$14k). I paid for advertising too – it cost NZ$160 for 2 large signs complete with photos (we are in a cul-de-sac these were essential and an agent would have charged for them anyways). We spent NZ$300 to advertise on Trademe.co.nz – eBay didn’t bother opening in NZ – Trademe is  the local equivalent – but  actually has fair fees and is the only way to buy and sell garage sales stuff here now.  We wasted NZ$500 for one colour photo ad in the Saturday night newspaper – I tracked how many came from that ad to the website – about 3. The Trademe add had over 2,500 hits in the 2 1/2 months it was up. Many people found it from the sign as well because its a neighbourhood people like to stay in because of the local restricted zone school.

There is still several glossy magazines that vendors pay to advertise their homes for sale  in (only available if you have an agent) – it does a great job in advertising the Real Estate Agencies. Its fun to flick thru from time to time – but now I’m serious about buying a house – I use Trademe which allows me to easily see the new listings in suburbs and price brackets of interest.

About a week after the house sale – my mother-in-law (well we’re not married but there’s not a short way to describe the relationship in English) – Jeanne Malthus died.  Its not normally my policy to name and identify my family here but  I’d just like to make sure that Jeanne’s tribute page stays #1 for name – and that link should do it.   I think its a very nice development that Funeral Director’s now run tribute pages for clients. Hopefully they have a lot better chance a longevity than the Facebook versions!   Jeanne  was a lovely lady who was one of the generation who remembered when home phones were a special thing (her father was a policeman so he had one – that was unusual in small town NZ at the time) – who lived to learn how to send emails and read friends and her (other) son’s  blog.   My father died over 15 years ago – before the Internet became common – but he grew up in a world without indoor plumbing and died while still selling computers (in his 80’s).  To anyone who thinks that change and progress is bad – really should read some more history – Dicken’s was wrong –  we live in the best of times.

See I told you this post really had nothing much to do with Passive Income. I’ve done very little work this month. So to all of you who are just starting off this making passive income online caper and wondering why you’ve only made 2c after writing 10 articles – its because this business is the ultimate in delayed gratification – you will get paid months down the line – not now – later. The money I will bank this month  came from work I did a year or more ago.