I’ve been around Internet Marketing for a several years – so I am very familiar with scams.  What I’ve seen in the last 12-18 months is that some of  the  spammier Internet marketers have moved on to self-publishing scams. That’s not a surprise, given the huge growth in self-publishing,  it was  as predictable as a beer on a hot day.
What does surprise  me though, is that publishing has had self-publishing scams for longer than Internet Marketing has even existed. Vanity Presses, who charge would-be authors thousands of dollars for the chance to see their book in print with the vague promise of the chance of future sales, are not new.
It’s not really that surprising though when you think about. The psychology and the business opportunity, for the ethically challenged, are very similar.

The details vary but this usually involves ranking a website(s) in the search engine results and making money from a combination of affiliate sales, pay-per-click and pay-per-impression advertisers. It is a legitimate, even after last year’s changes with Google’s ranking algorithm, way to make money. The problem is the hype and over-promising of the marketers involved. 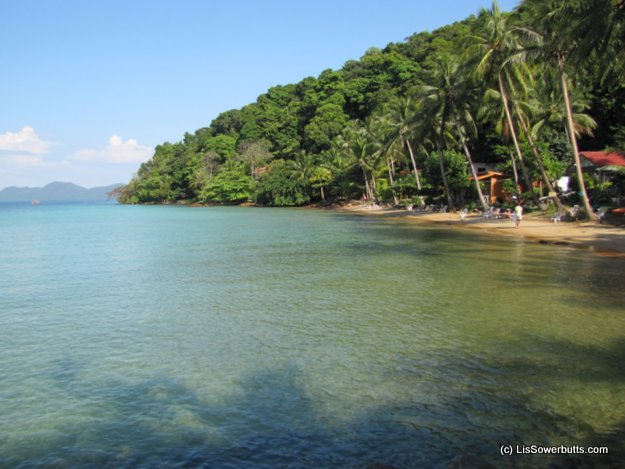 Thai Beaches Have a Lot toAnswer For

Self-publishing is definitely a gold rush industry at the moment, plus traditional publishing is going through very hard times.  Even before the Kindle eReader, Amazon was a disruptive force in the industry, with Kindle, and eBook sales in general booming, the landscape is being re-written.
It’s not a surprise then to find some of the biggest names in publishing are getting onto this particular scam – possibly as a desperate act to save their under-threat business model. Simon Schuster launching a new self-publishing arm called Archways Publishing. The unwary may be tempted to hand over the up to $22,000 they are charging in the belief they will be in S&S’s catalogue and bookshops will stock them. No and no.

Here’s The Reality – For the Wannabe-Authors

If you want to “just write” and not bother with the whole marketing thing – then make sure you have a well-paying career, or a generous partner. Even trad published authors need to be involved in publicity and marketing campaigns. They do book signings, media interviews. Increasingly they are expected to be active in social media.
If you self-publish – then it’s all up to you: you have total control.  Don’t therefore sign an incomprehensible contract and hire a “self-publishing company” – because – let’s face it – that’s kinda a contradiction. YOU are self-publishing. You can’t delegate that over-all control to someone else. You get to take responsibility.
Which doesn’t mean that you have to do it all yourself. In particular I think most would agree that we don’t have the skills to:
Many others will choose to outsource book formatting, and may hire a virtual assistant to help with the admin and the social media. Most of us who are in business don’t do it without a book-keeper or an account and many have access to a lawyer.

Here’s The Reality – For the Internet Marketers

Your product is key. All the promotional skills in the world won’t get you very far if your book is rubbish. For all its flaws, the Amazon review system still works. You can pay for or get your mates to provide all the 5-star reviews for the launch, but once the real punters leave their 1-star reviews it will go awfully wrong.
Which is not to say you have to be an awesome writer, or even prepared to become one. Ghostwriting has long been a legitimate profession and there is nothing wrong with paying someone for their words and then putting your name on it. But if you are paying 0.01c/word for an English-as-a-second-language writer – then see my comment above about quality.
Gaming Amazon in terms of getting fake reviews, or even genuine reviews, from mates, is a short-term game, which Amazon has already started closing down. It’s now against the Kindle Publishing Terms of Service for authors to review other writer’s books. Joining a paid forum or other online group and then reviewing each other’s books just makes it even easier for Amazon to find and remove the reviews in question. And yes they have banned people before for abusing their platform – look to see that increasing in the future.

Basically self-publishing a book and making money from it is entirely possible the success stories are true. They are also the minority. It’s not easy to do this successfully. I’m certainly not selling enough to retire that Thai beach yet. It is however, in my not-so-humble opinion, one of the most exciting times in all of history to be either a writer or an online entrepreneur.