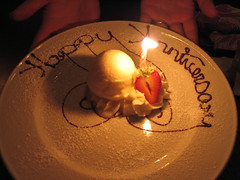 Since my last post on Freelance Writing we have had a quick trip back to New Zealand for the New Zealand Dancesport Championships. This is my anniversary post. Sept 2007 was when we arrived in Perth, Western Australia and decided to stay awhile. We decided that I would try to make an online income to replace my IT salary (US$1000/week round figures) – I gave myself until December to do it – LOL

I know I wrote how my online business was going up until May – yes ignore the date time travel is alive and well on blogs.

March I found a new approach to making money on-line. Wish I could remember how I found it but I found Vic’s Make Money online site around then. He’s responsible for the name of this site because the initial idea was to buy 100 info domains.

Well I set up some sites and waited for Google to index them, and waited, and in fact I’m still waiting. Almost simultaneously info BANS sites fell out of favour with Google. I was a little pissed to say the least – in fact I cried in frustration quite literally. Everything seems to have worked for people last month or last week – but as soon as I touched it poof – gone. I was in no doubt that Vic was explaining how he made money to me – but the search engine’s rules appeared to change every time I tried what was being recommended!

I was pretty very close to giving up then – I was also participating in Vic’s trends blogging contest: where you blog about current news – which did at least make me realize that the trick to getting traffic was to write about something that people were actively searching on – duh! Vic said in one of video posts something that stuck with – “proof of life” – (according to the movie of the same name this is the first thing that hostage negotiators ask for) . So I did my own little experiment. I had already bought a info domain which was the same keyword phrase of my best performing hub page. I knew how many people searched for the phrase – because my hubpage was normally ranked #1 or #2 in Google, I knew it wouldn’t make me a fortune but I just wanted to know I could get my own site on the first page. I put a niche blog on the domain using Court’s Keyword Sniping.

Well it worked. For the last couple of months my site is regularly on page 1 or 2 of the Google results for a number of its keywords. For weeks it alternated from being not indexed to being in the top 10 pages. It seems to have settled down now. It the CPC is rubbish – it will never make me more that $1/day – and its made me nothing to date because I haven’t yet dared put Adsense on it –I want it to be more consistently on page #1 before I do that. I’ve done it I have proven to myself I can get a site indexed and ranked even on an info domain.

I was concentrated on my freelance writing when the other day I got an email saying that eBay had paid me – $10. I went an checked my eBay earnings for the first time in a couple of months and oddly some of those un-indexed BANS sites were getting clicks and a couple had made me a little bit of money. I did further investigation: Google still hated me but Yahoo loves me! And it wasn’t even that sites which I had developed properly – think of the potential if I actually put some more pages on the sites 🙂

So now after a year I can happily report that my actual website online income is about the same as it has been for month. BUT – and its a big but, I definitely feel I am at the end of the beginning at the start of the real beginning … To Be Continued the fun has just started!

12 replies on “Tips from the First Year On Line”

Congratulations! I think you have passed “The Dip”.
It’s not simple and it’s not easy, and it’s definitely not quick to get rich online.

I did read somewhere how Google accidentally took out all of the .info domains. Since they were sold for $1-$2 they were attractive to spammers. I am planning to just try and focus on a few quality sites than trying to make a site on every crazy idea I have.

thanks for commenting Mike. I read Seth’s The Dip in a bookshop (its not very long) and really related to it! I thought it might be a hole for a moment but now I think its a dip!

I don’t think there was anything accidental with Google taking out the infos – but they can’t kill them for ever and everything because real people acutally think that info – means well info LOL!

There are times I scratch my head wondering how people make money on the internet. My hopes are that Vic will help a ton.

Hey Vic is a crazy ADD guy from Puerto Rico whose religion I don’t believe in – but as far as business is concerned he knows his shit and he makes serious money. Personally Im not prepared to work 18 hours/day like he does -but I believe I can make a full-time living on the internet. Its taken me a year but I finally am starting to understand how to make money. Believe me marketing is totally alien to me and this guy has actually started to make me understand how it works! Read/listen to everything on his blog – and then do it again and eventually it starts to make sense 🙂

Loved your blog, I found it from Vic’s site. I’m very new to his site and I’d love to find other people like myself who read his blog and do what he says 🙂

Are you friends with people that are doing the same things like he says to do? I started my local niche news site it’s very very new though so I feel embarrassed even telling what it is lol.

I bookmarked you so hope to see ya soon!

hi Lissie, pretty interesting post. I think the DIP is always there. My advice is just to build, and build and build, also don’t be scared of adding adsense, if your site has enough backlinks it will stay up regardless adsense or not. Good luck.

Hi Mark Z: there is a core group of people at bloggerunleashed who used to hang out at the ustream channel. I am sure the community will develop once Vic starts his academy.
Ozzie: can I can you ozzie 🙂 nice site and yes having added Adsense on my first KW focussed site and the rankings having stayed the same. 🙂

I came over because I happened to see your comment on another blog, that you were in corporate IT at one time. Me too!! So I know how bad it is!!! I am planning on quitting for the 2nd time, 3 weeks from now, and I will never go back again either. I hate living in a cubicle. By the way, I did not realize or remember you had a blog or I would have stopped by sooner 🙂

Hi Pat, nice to have you visit. I often don’t link to this blog in comments- usually something more kw focussed!
Yeah when you are over corporate IT you are REALLY over it – I was usually a business analyst or test manager – so pretty much I got to make most of the people unhappy most of the time – and it destoyed my soul in the end!
I doubt that you will have to go back and neither will I – when you get it does become clear doesn’t it – its taken a year but I think I got it LOL

You probably have been visiting my blog and I didn’t even know it, lol!