I am liking Pinterest! SY gave me a heads up about why I should use Pinterest ages ago, and sent me an invite. I ignored it. Then she told me I REALLY needed to have a look, and finally I did. I figured it would be a distraction, it was, but what may well be a useful one.  First off the site scared the bejeesus out of me – it is very “pretty” – I am graphically challenged and easily scared by people who can do pretty! Apparently a lot of the users are female – I’m not surprised.

But even for the non-visual amongst us, and, dare I say it, those of us who don’t have any clues as to “our style”, and no desire to plan a wedding, its kinda cool, and useful.

Cool Stuff You Can Do On Printerest

And For the Internet Marketers Among You.. 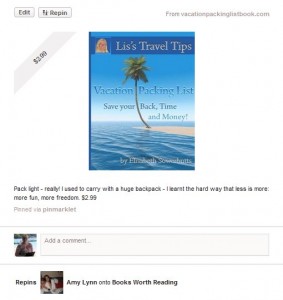 Now, at the moment, there seems to be more real people on Pinterest than internet marketers, it won’t stay that way for long, as several of the big boys are calling Pinterest as the next big thing in social media.
Frankly its refreshing – the interface is simple and intutive – after G+ and Facebook its a bloody joy I can assure you! Within minutes of tossing up some pretty pictures I had complete strangers share some of my stuff. That kinda gave me pause, these people did it because they wanted to not because they knew that sharing my book site might make me money.
Amazing! I want to go to Myanmar this year because I don’t think it will be long before its completely over-run with tour groups, and has a McDonalds on every corner, and nice modern buses and trains.  It will loose its current run-down, worn-out bucolic charm. You might want to check out Pinterest while its still dominated by people sharing their interests, it has a certain bucolic charm too.

17 replies on “Pinterest For Backlinks, Affiliate Sales, and Recipes”

Doh! I’ve been using Pinterest for weeks now (it’s the best recipe and funny picture collector that I’ve ever seen- so much better than emailing stuff to myself!), and while I thought of it in a “maybe if I ever try to sell my handmade jewelry again” kind of way, I totally spaced on the internet/affiliate marketer aspect. My main niche just so happens to be my main obsession as well, and I write 15K word posts on the subject along with lots of pix that I’ve taken myself. And… several of my friends/followers on Pinterest and FB have the same obsession. Ahem. I’m off to do some pinning. Thank you! 🙂

LOL WV – you’re the opposite to me – I was looking at if from a backlink point of view and then realised it was actually useful for collecting recipes !

*lol* To be fair, I’ve been waaaaay lazy and hardly done any IM work in months. Recipes, however, I’ve been doing. 😀

Hey Lis – how do you get two links in, and the price? I got one link, and since I’m trying to use Amazon’s new MyHabit.com it’s tricky. I edited the link to point to my site where I put up a MyHabit rotating banner, but a 2nd link would help!

I just checked out Pinterest and requested an invite. I can see all kinds of possibilities for this. I’ve got a lot of recipes. My favorite books I’m reading or have read (with amazon links). Pictures of me with my new favorite products (with links to amazon). Funny pictures of my many cats linking to a cat blog with affiliate products. Like I said, there are all kinds of possibilities. Plus, it looks so simple and straightforward. Thanks Lis!

The site encourages you to share websites or webpages you like, but in its TOS it then says you can’t pin images you don’t own the copyright to. Contradictory, eh?

The reason is that Pinterest takes the right to keep and SELL every photo you pin. I wonder how many people read that bit?

I don’t know about the copyright stuff – but I have researched the Pinterest adding their own affiliate links. Yes they are, but, no, they don’t overwrite any links that you add.

Today I was invited to the Pinterest community after a waiting period of 2 days. Till now I have seen only one link that can be added. But it’s just one day on Pinterest. Pinterest the Next big thing I guess not! As I see it integrates (read dependent) with FB, so something tells me it’s not gonna work.

I am concerned about Marisa’s comment that they own the right to sell the images. I am a photographer I don’t want anybody to pin my photos and then some other guy selling the photos. Too heavy a price to pay to get eyeballs. I still have much to explore though. By the weekend I shall be decoding the interest in the Pinterest.

I’ve used pinterest to optimize my site and the result was amazing my site was jumped from #234 to #9 in few weeks time.

The trick is we must got our website pinned and repinned by many people this is the hardest part. Most of pinterest users won’t doing repin when they aren’t like what we pinned.

I do simple thing to outsource it on fiverr and got my site pinned by more than 70 people, I don’t know how can he did it just search by typing pinterest on fiverr and you will find it.

As I know currently pinterest is best for SEO for these reason:
1. Once our website pinned it has 3 backlinks counts
2. Google interest in social media signal so it will not tagged as links farm
3. Currently pinterest links are dofollow even the image
4. Also support anchor text, it’s perfect for placing our keywords

Hi Lissie – how is the Pinterest experiment going – I see it’s going to list on the stockmarket so it must be doing something right. Do you still use it? Is it of any use at all for backlinks etc… ?

Lis, I LOVE Pinterest. It’s got my creative juice flowing for sure. Do you think too many links back to our own sites can have a negative effect though?